A popular sports analysis mechanism is known as a 'blind resume'.  The idea is to provide a set of characteristics of two anonymous athletes/teams and allow the viewer to guess which 'resume' belongs to which athlete/team.  For basketball fans, this method is often used in the lead up to the annual NCAA basketball tournament as a way to evaluate two teams competing for a final spot in the field.

And for those who haven't seen a 'blind resume' play out- the correct assignment is almost always the opposite.  It's a sneaky, yet intriguing method and one, I think, applies well to the serialization L4/L5 vendor space which has long been rife with misperception as a result of marketing imbalance and, quite frankly, misleading advertising.

In particular this method can be used to show a noticeable disparity when it comes to manufacturers' ability to perform testing as part of upcoming DSCSA 2023 efforts.

As you've heard me say numerous times before- testing is the most important phase of any serialization effort.   Testing is not only a critical phase in determining overall success/failure of an effort, but is also the phase that most directly drives the level of internal/external resource effort needed and overall cost of a serialization project.   This is because a lack of testing performed, or the inability to perform adequate testing, increases overall risk- and when risk increases, the likelihood of exceptions/failures, including very costly exceptions/failures, increases as well.

So the key message is that all manufacturers need to plan for extensive testing as part of DSCSA 2023 efforts and must take steps to ensure this testing can be performed efficiently and cost-effectively.

Interestingly, simply looking at who your serialization L4/L5 vendor is plays a major part in determining your ability to test. Enter the 'blind resume'... Good Luck!! 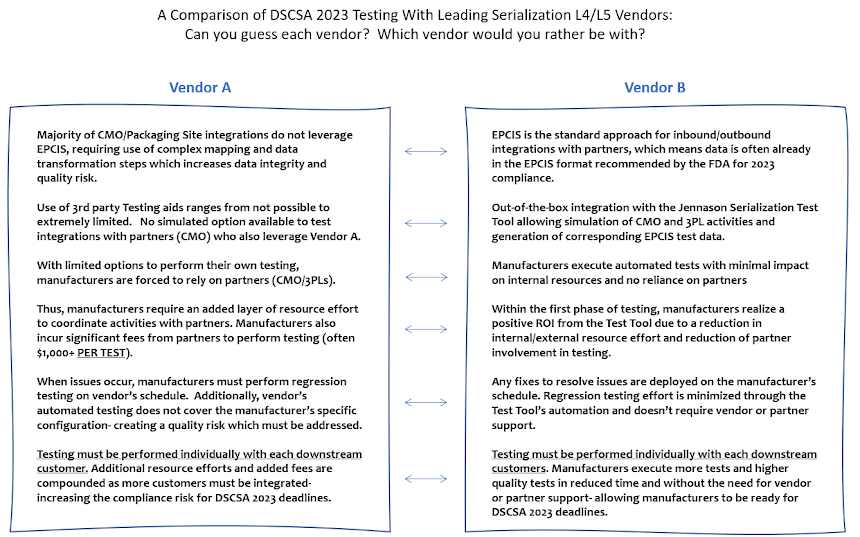 Remember the rule: Manufacturers who don't test or can't test increase their risk.  And those who simply 'trust' their vendor to perform all necessary testing will experience this- https://www.lifescienceserialization.com/2022/06/we-can-do-better-than-this.html -sooner rather than later.

I encourage everyone to leave their guesses in the comments!!  And feel free to reach out to Jennason for the blind resume answers and to hear more about our experiences testing against all serialization L4/L5 vendors.